Welcome to VanDusen Garden in winter. Please take a Garden map with you to help follow this self-guided tour. As much as possible, please keep 2 metres distance from others for COVID-19 safety. Follow the directions and numbered signs to the plants highlighted.

In our temperate climate the winter season showcases interesting colours, textures, fruits, and flowers that warm the dullness of rainy days and invite us toward the pleasures of spring. VanDusen’s Winter Walk features plants that dress the garden for winter. Exit right from the plaza and stay on the right-hand paved path past the first junction and continue on to the first numbered sign.

1- Silver maple (Acer saccharinum) features rough textured bark and large spreading branches. Two silver maples were planted at VanDusen in 1973, one on each side of this paved walkway. This species is native to eastern Canada and USA, is fast growing and survives wet soils and floods. From here continue to the junction and go several steps right to look across at the evergreen shrubs surrounding the tall straight tree trunks. 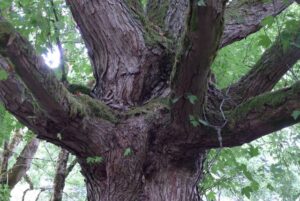 2 – Japanese laurel (Aucuba japonica) with its soft yellow-speckled leaves and rounded form sets off the rough corrugated bark of the tall trees. Variegated cultivars of Aucuba like ‘Gold Dust’ and ‘Crotonifolia’ brighten shaded areas under trees and thrive whether growing conditions are moist or dry. The fruit of Aucuba, a red drupe with a single seed within the fleshy fruit, enhances its winter look. As Aucuba is usually dioecious. i.e. male and female flowers on separate plants, a male plant is needed among several female plants to assure pollination for fruit. Though Aucuba is commonly seen in commercial plantings, this woodland setting echoes their native forests of Japan and east Asia. Just to the left is the next featured plant. 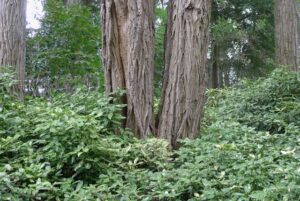 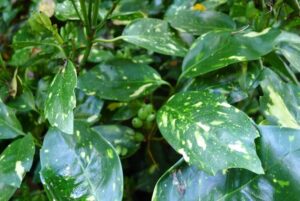 3 – Variegated Japanese sedge (Carex oshimensis ‘Evergold’) is a cultivar of a species of sedge native to dry woods and rocky slopes of Japan’s Honshu island where Mt Fuji is. Its variegated evergreen or semi-evergreen foliage lights up a winter day. Its clumping habit creates tussocks that give a pleasing texture and can curtail the rampant spreading of other low growing plants. The next several plants will be on the right side of this path. 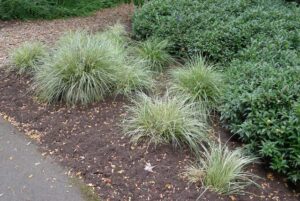 4 – Variegated grassleaf sweet flag (Acorus gramineus ‘Ogon’) has a common name that refers to the sweet scent of its crushed foliage. The parent species of this grass-like plant is native to wetland areas of east Asia. Its cultivar ‘Ogon’ is a selection with dwarf habit and narrow variegated foliage. As a versatile ground cover and accent plant, it is reliable and attractive in all seasons, valued for its butter-yellow striped blades and graceful, arching habit. 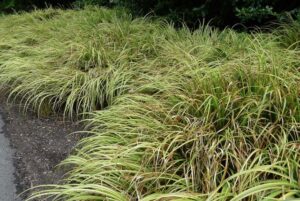 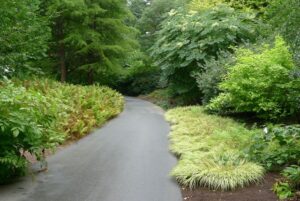 5 – Hybrid honeysuckle (Lonicera x purpusii) is a shrub that is grown for the profusion and sweet fragrance of its winter bloom. Between December and March, it bears clusters of white tubular flowers with prominent yellow anthers and may attract insect pollinators. It is deciduous or semi-evergreen. Like all honeysuckles, it has opposite leaves and leaf buds. This hybrid of two Chinese species of honeysuckle was developed at Darmstadt Botanic Garden in Germany in the 1920s and named in honour of Carl and Joseph Purpus, brothers who had extensively explored the botany of western North America and introduced many species into cultivation. 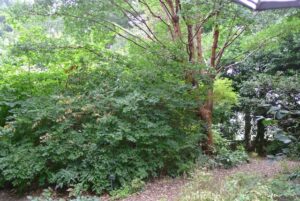 6 – Paperbark maple (Acer griseum) just up the mulched path at the right is one of several of this species of maple at VanDusen. This one was acquired in 2001. Paperbark maple has become a popular small street tree in Metro Vancouver over the past 25 years and is valued for its cinnamon-coloured peeling bark, graceful form and attractive foliage. Native to central China, Acer griseum is endangered and declining in the wild due to small fragmented populations and poor reproduction. It was introduced to cultivation by Ernest Wilson in 1901. The epithet “griseum’ refers to the slight greyish-glaucous cast of the underside of its trifoliate leaves which turn a gorgeous red in fall. 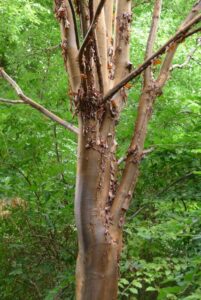 7 – Blue holly (Ilex x meserveae ‘Blue Princess’) fits our winter holiday image of glistening, prickly holly leaves and red fruits, but is a better choice than the invasive English holly because blue holly’s dark red fruits are sterile. When birds eat the fruit, any seeds they drop in our local forests will be infertile and will not sprout. Hollies are dioecious with male and female flowers on separate plants. This cultivar is a female clone and will not produce showy fruit without pollination from a male holly. Its foliage colour is bluish-green. The Meserve hybrids were developed by Kathleen K. Meserve in New York in the 1950s. 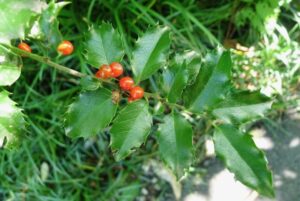 8- Japanese mountain ash (Sorbus commixta) is native to east Asia and is deciduous with autumn colour of yellow and red. It is in the rose family and retains its bright fruits into winter. Its orange-red fruits are pomes, as are apples and pears, and have several seeds. The term “pome” derives from the Old French word for apple, pome, which in modern French is pomme. 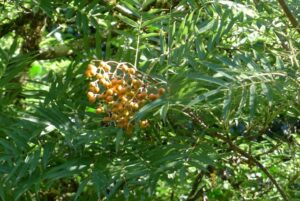 9 – Boxleaf honeysuckle (Lonicera nitida ‘Baggesen’s Gold’) is another shrub honeysuckle and lights the winter garden with golden colour (like the Aucuba, Carex, and Acorus seen earlier). Its arching form and fine leaved texture contrast with other nearby plants. Like boxwood, it accepts shearing and shaping. The wild green form of this species is native to central China and was first collected for British gardens in 1908. The Baggesen family of nurserymen in England later propagated plants from a single golden spray found on a normal green Lonicera nitida, which led in 1967 to the introduction of this important and popular cultivar. Continue a few steps across the intersecting junction and look right. 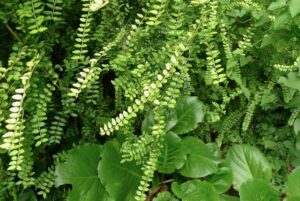 10 – Dwarf hiba arborvitae (Thujopsis dolobrata ‘Nana’) is a dwarf cultivar of the hiba arborvitae, Thujopsis dolobrata, endemic to Japan. It is a monotypic genus, i.e. the genus has only one species. The genus name means “like a Thuja” and invites comparison to our native western redcedar Thuja plicata, whose foliage has similar overlapping scales. This cultivar has flat, thick, shiny foliage, and golden colour and on the underside of the needles its stomata are visible as white lines. It has long been grown in Japan.  Continue a few steps ahead and look right. 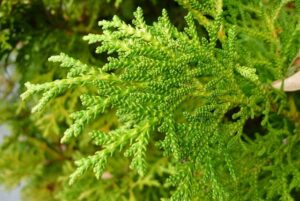 11 – Bloodtwig dogwood (Cornus sanguinea ‘Midwinter Fire’) is so named for the red, orange and gold colours of new growth, especially striking in winter after the leaves have fallen. The species name sanguinea means “blood”.  Its small inconspicuous white flowers in late spring are followed by blue-black fruits in late summer and fall. One shrub can spread several feet by runners (stolons). The parent species is native to Europe and western Asia. This cultivar was selected in the 1980s and introduced around 1990. Now turn back to the junction and go right to the next plant, a small tree. 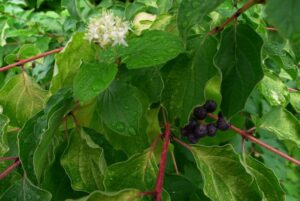 12 – Hybrid hawthorn (Crataegus x lavalleei), another member of the rose family, in winter displays its orange-red pome fruits that are borne in clusters. With care to avoid any two-inch thorns, look closely at the small apple-like fruits with the familiar star-shaped pattern of pointed sepals at one end of the fruit. It is a tree for all seasons – white flowers in spring, orange-red fruits autumn into winter, and bronze-red autumn colour. This hybrid tree originated in 1870 at the Arboretum Segrez near Paris and is a cross of two North American species. It was named for the Arboretum’s founder Pierre Lavallee. Turn back now and look right across the path at the next tree, a North American native. 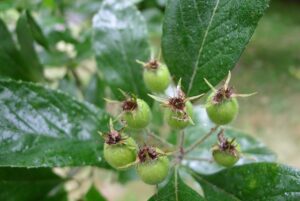 13 – American beech (Fagus grandifolia) is not as common in Metro Vancouver as its relative, the highly variable European beech, Fagus sylvatica, though both species can grow quite large and make excellent shade trees. American beech is native from Nova Scotia and southern Ontario all the way down to Florida.  In natural forest settings this species can grow a vast network of surface roots whose suckers may develop into full trees such that an entire beech grove may grow from a single tree. Fall colour is golden bronze and like European beech its leaves often remain on the tree into winter. Its sharp pointed buds, more visible in winter, help identify it. Start retracing your route back toward the Visitor Centre and across from the Acorus (#4) planting look right for the mulched path that takes you to the next featured tree. 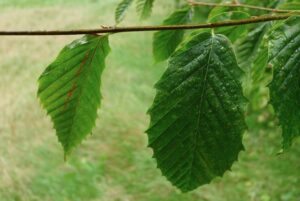 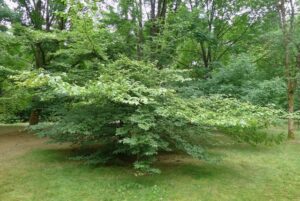 14 – Musclewood tree (Carpinus caroliniana) is a deciduous native of eastern Canada and USA. This hornbeam has tall, spreading branches and in spring sprouts shiny green, serrated leaves that turn orange and red as autumn comes. It is monoecious and has separate male (green) and female (white) flowers on the same tree. Hornbeams have winged seeds reminiscent of maple seeds but instead of being held in pairs they develop in hanging clusters of winged nutlets.  American hornbeam’s common name “musclewood” refers to the prominent rippling or fluting of the trunk of the mature tree as seen on this nearly 50 years old tree. Return to the paved path, continue right to the junction and turn right. 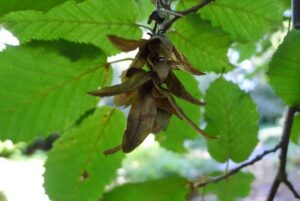 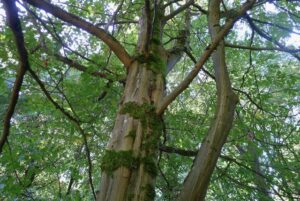 15 – Silver maple (Acer saccharinum) on the right side of the path is the “sister” tree of the silver maple nearby at stop #1. Its shaggy strips of exfoliating, peeling bark show dramatic flair when viewed against the leafless backdrop of winter. 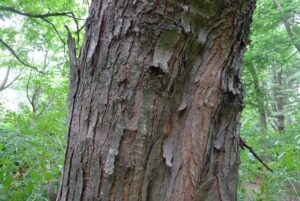 Our tour ends here and the Visitor Centre is just ahead. Thank you for visiting today!

All the complicated details

Thus having prepared their buds

against a sure winter

stand sleeping in the cold.