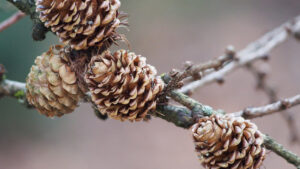 Welcome to VanDusen Garden in winter. Please take a Garden map with you to help you follow this self-guided tour. As much as possible as you walk, please maintain the recommended 2 metres distance from others for Covid-19 safety.

Our route leaves the holiday bustle of the lower Garden, heads into the Sino-Himalayan area by way of the Rhododendron Walk, and then moves on to the north edge of the Stone Garden above the Waterfall. Enjoy the scents and textures, varied barks and branching patterns, and leaves and buds of the trees and shrubs.

Start left from the entry Plaza, cross the short bridge, pass the Bentall Garden pool and Fragrance Garden and turn left at the paved path before the Rose Garden and the Laburnum Walk. On the knoll ahead are several Japanese fibre banana plants (Musa basjoo) huddled under wraps for winter protection.

1 – Continue as the path curves right to the junction across from Service Gate 2 and look ahead and slightly right at the broadly spreading branches of handkerchief or dove tree (Davidia involucrata), a large tree that in May will be showing off its white pendulous flower bracts. In winter it offers strong form, flaking bark, sharp-pointed red buds and persistent small round fruits. Davidia is a rare genus native to moist, subtropical woodlands of central China. Pere Armand David, a French naturalist and missionary found it in China in 1869. In 1901 E.H Wilson brought seed back to England. He said of the large white bracts that surround the flowers, “when stirred by the slightest breeze, they resemble huge butterflies hovering amongst the tree”.

2 – Proceed quite a distance up the paved path. Beyond where the Great Lawn begins is the sign for Magnolias & Hydrangeas. Take the path to the right just before the sign and stop at the sculpture at the centre of the bed.  To the left is the deciduous Dawson’s magnolia (Magnolia dawsoniana), now bare of leaves. Note its winter silhouette of zigzag angular branching and its sideways pointing fuzzy flower buds.  Native to Sichuan in scattered populations, this magnolia is ranked as endangered (EN) in the wild on the IUCN Red List, at www.iucnredlist.org

3 – Return to the paved path of the Rhododendron Walk and continue a short way onward. Just ahead on the right from branches that reach across the path, the fragrance of Chinese witchhazel (Hamamelis mollis) perfumes the air. Its small yellow filamentous flowers cluster in late winter on bare branches. Introduced from China to horticulture by Charles Maries for Veitch nurseries in 1879, and later by Ernest Wilson for Arnold Arboretum, this species is a parent to other witchhazel hybrids blooming along this walk. Linnaeus named the species mollis, Latin for “soft”, for the soft felted underside of its leaves. Asian witchhazels bloom in winter on leafless branches unlike eastern North American species which bloom in fall while still in leaf.

4 – Continue on, passing a strip of lawn to the Japanese Collection to your right, which includes three of our next featured plants. Today, Japan’s diverse and unique flora was created through a combination of natural conditions and human interventions. On your right is a young maple, now bare of leaves, which can be recognized as a maple by its opposite twigs and buds. For centuries, Japanese horticulture has featured lovely ornamental maples such as this cultivar, a golden full moon maple (Acer shirasawanum ‘Aurem’). The species is named after Mio Shirawasa (1868-1947) a Japanese dendrologist (a scientist specializing in trees and shrubs). 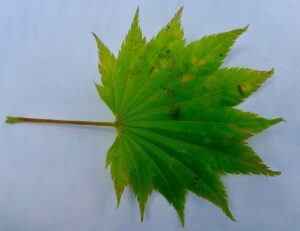 5 – Further along, beneath a large deciduous tree, is the broadleaf evergreen shrub Rhododendron yakushimanum. There are several of these along our route today. This native of windswept Yakushima, an island of Japan, has been widely hybridized and is valued for its hardiness, compact habit and beautiful flowers, rose-pink in the bud and paler when open. The undersides of its leaves have a soft, velvety indumentum, a covering of fine hairs called trichomes, which helps it resist water loss and survive temperature extremes. 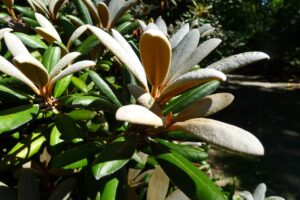 6 – Follow the paved path as it curves right. On the right is a Japanese larch (Larix kaempferi), native to the mountains of central Honshu in Japan. This conifer is named for Engelbert Kaempfer, a German physician and plant explorer who studied the plants and culture of Japan while serving the Dutch East India Trading Company in Nagasaki Bay from 1690 to 1692.  Its deciduous needles grow in clusters and are shed in autumn, exposing bumpy leaf buds and small cones which offer texture on its bare winter branches. 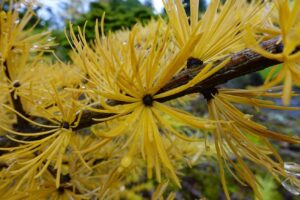 Vocabulary of Conifers: With more conifers yet to come on this tour let us review some terms. A common but inaccurate “catchall” term for a conifer is to call it an evergreen. This is a misnomer as “evergreen” simply refers to a plant that keeps its leaves year-round. Many conifers are evergreen but some, like the larch and others, are deciduous and lose their leaves. Conifers are so named because they bear cones. If a cone is from a pine we call it a pine cone but spruces, Douglas firs, true firs, true cedars, western redcedars, redwoods and others bear cones, so we refer to their various cones according to the type of tree. The most noticeable cones are female cones where the seeds are produced but conifers also have less conspicuous male cones which produce pollen. A larger category to which the conifers belong is gymnosperms, which means “naked seed”. The seed is unprotected by an ovary or true fruit in contrast to seeds of angiosperms, the flowering plants.

7 – Now look across the path at the large conifer opposite the larch and note the pendulous branches, long needles, and long hanging cones of this Himalayan spruce (Picea smithiana), native to mountain forests of the Himalayas and sometimes called morinda spruce. It was first described in 1832 by Nathaniel Wallich, who named it for Sir James Edward Smith, a founder and first president of the Linnaean Society. Cones of spruces hang down from the branches, as do Douglas fir cones, while the cones of the true firs (Abies species) point upward. 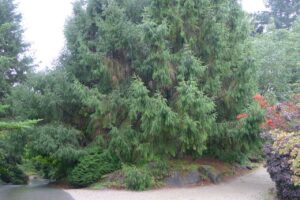 8 – Nearby to the right of the Himalayan spruce, a few metres from the path, is the tigertail spruce (Picea torano), endemic to southern Japan. It grows over 30 metres in height on volcanic soils at elevations of 400 to 1850 metres. Its curved, very rigid sharp-pointed leaves (needles) stand out even among spruces. The name “tigertail” may refer to the pendulous branchlets on older trees or the claw-like sharpness of the needles. It is listed as “Vulnerable” (VU) on the IUCN Red List.

9 – Continue straight ahead to the bed outside the Meditation Garden. Directly ahead is a tree with a crooked trunk, Formosan sweet gum (Liquidambar formosana), which was named by Henry Fletcher Hance, a British botanist and civil servant in Hong Kong. His specimen in the Kew herbarium dates to 1867. Liquidambar, formerly in the witchhazel family has been reclassified to Altingiaceae, a small family. It is a resinous tree used in medicines and perfumes. The botanist E.H. Wilson observed that the wood was traditionally used in China to make boxes for high quality teas.

10 – A few steps to the left beside the Meditation Garden entrance is Harland’s box (Buxus harlandii), a member of the box family (Buxaceae), which bears small fragrant yellow flowers in spring. H.F. Hance named it in 1872 for his friend Dr. William Aurelius Harland.  Both men are buried in a Hong Kong cemetery. This evergreen boxwood has dark green foliage with an identifying slight notch at the tips of the leaves. It is drought-tolerant and deer resistant. Feel the twigs for the ridge between nodes, which develops into the fissured or corky bark on older specimens, a desirable feature when it is used for bonsai.

11 – Continue left to the nearby junction and follow the paved middle path up the hill. At the gravel path that turns to the right look for the wide overhead branching of the small deciduous white mulberry (Morus alba ‘Unryu’). Mulberry is widely cultivated in China. It is coppiced in plantations to produce abundant leaves to feed the silkworm larvae (caterpillars). Sericulture and silk-making date back over 4000 years in China. The Silk Road from 2nd century AD enabled the trade of silk and other goods from China to the West. Silkworms, mulberries and knowledge also moved along the trade routes to create new centres of silk production.

Continue ahead on the paved path and look just ahead on your right for a small group of Rhododendron yakushimanum (featured at stop #5). Here you can easily touch the underside of the leaves to feel the softness of the indumentum.

12 – At the next junction look left at the large pendulous spruces leaning out over the rocks. This is Sargent spruce (Picea brachytyla). Grown from wild-collected seed, these spruces are native to the montane coniferous forests of the eastern Himalayas and mountains of the southwest plateau of China. Its seed cones mature to brown or purplish brown. The common name refers to Charles Sprague Sargent, the first director of Harvard’s Arnold Arboretum.  IUCN Red List classifies this species as “Vulnerable” (VU) and its fragmented population is declining. At VanDusen we have three trees in this bed that we received in 1980 from the UBC Botanical Garden, which whom we regularly share plants for our respective collections. 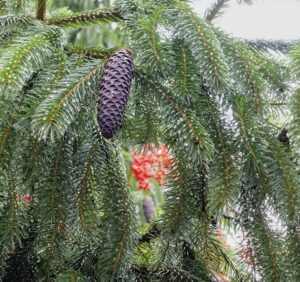 13 – The Stone Garden will be at your left as you continue straight ahead. Past the slightly raised plantings on the right and near the jade bench look right at the short-needled foliage and small cones of Chinese hemlock (Tsuga forrestii), an Asian relative of our native hemlock. Native to southwest China, it is threatened by increased logging and habitat loss. 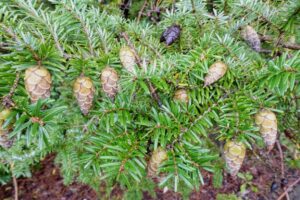 14 – Look behind it and beyond for the large 5-needled white pines planted along the path and enjoy their gracefulness, soft textures and large pine cones. These are Himalayan pine (Pinus wallichiana), named for Nathaniel Wallich.

15 – Proceed to the living willow fence at the top of the waterfall. Behind it is a ginkgo tree, now bare of leaves. Ginkgo is an ancient tree, a gymnosperm but not a conifer. The common name refers to its unique fan-shaped leaves that resemble those of maidenhair fern. Maidenhair tree (Ginkgo biloba), now restricted in the wild to a limited area in south China, was once widespread and occurred in North America. Ancient fossils have been found in BC and Washington state. Ginkgo is deciduous, shedding its saffron-yellow leaves in autumn, and it is also dioecious, with separate male (pollen-bearing) and female (seed-bearing) trees. Ginkgo extracts are widely used medicinally and in China and, after removing the outer fleshy coating, the seeds are cooked and eaten. The seeds contain a toxic phytochemical which is neutralized by cooking, but one should exercise caution as poisonings have been reported. 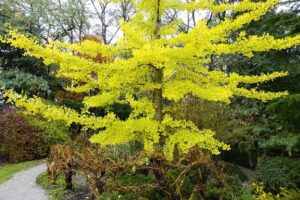 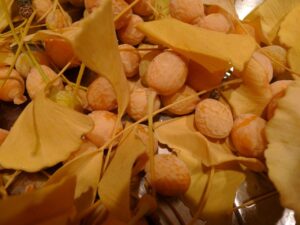 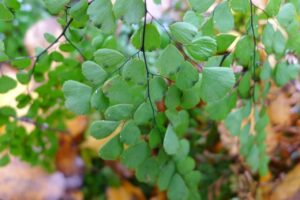 Our winter tour ends here. Retrace your route to return to the Visitor Centre. As you walk among VanDusen’s thousands of plants, enjoy their variety and beauty and the many ways we can describe them. The poet Howard Nemerov expressed this in these few stanzas from his poem “Learning the Trees”:

The words themselves are a delight to learn,

Where bark is papery, plated, warty or smooth.

But best of all are the words that shape the leaves—

And their venation—palmate and parallel—

Sufficiently provided, you may now

Go forth to the forests and the shady streets

To see how the chaos of experience

Answers to catalogue and category.