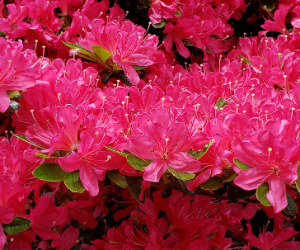 Welcome to VanDusen Botanical Garden’s 55 acres, which contain 8,088 taxa (species, subspecies, cultivars, varieties) from around the world. A botanic garden is a living museum bringing the world’s plant diversity to the public. Some plants are rare or endangered which you would not be able to see otherwise. VanDusen has 70 plant collections including the Sino-Himalayan Collection highlighted in today’s tour.

In 1981 VanDusen’s curator Roy Forster C.M. took part in the first Canadian Botanical Delegation to the People’s Republic of China. The highlight of the trip was the ascent of Mt. Omei or Omei Shan.  At 3,099m (10,167 ft) it is the highest of the Four Sacred Buddhist Mountains in China’s Sichuan Province. It was indeed an honour as very few outsiders had been granted permission to make the pilgrimage to the summit over the past decades. Mt. Omei is known for its high level of endemism (species being native to a single defined zone). Today’s tour highlights some of the plants the delegation witnessed in situ.  To put Mt. Omei’s elevation in perspective – our North Shore mountains are 1,231 m and Mt. Everest is 8,849 m.

Begin by exiting the Visitor Centre Plaza toward Livingstone Lake, turn left and cross over the wooden bridge.  Walk straight ahead until you reach the Formal Rose Garden, continue to your left following the path until you come to a crossroads.  Directly ahead is the magnificent 1 – handkerchief or dove tree (Davidia involucrata) named for French missionary Pere Armand David who sighted a lone tree at an altitude of 2,000 m in 1869.  The dove tree is native from south central to southwestern China as far as south as Sichuan and Yunnan.  A distinctive feature of this species is the inflorescence that features a pair of white bracts surrounding a purplish-red flower head.  The specific epithet involucrata derives from the botanical term “involucre”, meaning a whorl of bracts surrounding an inflorescence.  Photosynthesis takes place in the green bracts when they first appear.  In their white “handkerchief” stage they protect the pollen from spring rain and attract pollinators as they flutter in the breeze.  The story of how the dove tree came to be cultivated in Europe and North America can be found in the May 2019 Self-Guided Tour www.vandusengarden.org/sgtours 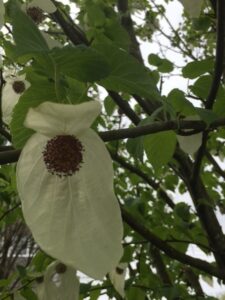 You are now at the base of the Rhododendron Walk. Most of the rhododendrons along the path are cultivars developed in England and Holland. The azaleas on the right-hand side of the path are rhododendrons and most are deciduous. VanDusen’s vast collection of species rhododendrons (those that grow naturally in the wild) are in the Sino-Himalayan Garden. Follow the path, take in the wonderful colours of the flowers and be sure to look at the leaves.  2 –Rhododendron fulvum on your left across from a woodchip path is of interest. Note the fuzzy brown lining on the underside of the leaves, known as “indumentum” (Latin for “garment” or “robe”), that forms a protective layer that sheds water and insulates in dry cold weather. Some rhododendron leaves have a coating of matted hairs on top of their leaves which is called tomentum (Latin for “cushion stuffing”). Along the path across from the Magnolias & Hydrangeas is the 3 – Rhododendron Bluebird Group. You will encounter the wonderful lavender-blue colour throughout the Garden, especially in the Sino-Himalayan Garden in the species 4 – Rhododendron augustinii. The species was named after Augustine Henry (1857 – 1930) a Scottish medical officer who collected plant specimens while working in China. He sent some 15,000 plant samples to Royal Botanic Gardens, Kew. His contributions led to our understanding of Sino-Himalayan flora and made way for future plant explorers, E.H. Wilson, George Forrest and Frank Kingdom Ward. You will note many plants named after these men. It is through the bravery of these and other plant explorers that we can enjoy trees and flowers from around the world in our gardens. 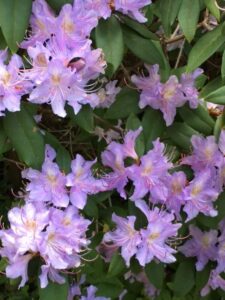 Continue up the path to the Japanese Collection sign. Turn right and walk past the red sculpture to the bed of 5 – tree or mountain peonies (Paeonia suffruticosa) ahead of you. In its native China tree peony is the king of flowers. Detailed writings as early as 536 CE record the tree peony’s use in medicine and cooking. Backtrack your steps and turn right on the grass path this side of the main path. Near the end of this area on your right is the 6 – large-prickled Mt. Omei rose (Rosa sericea subsp. omeiensis f. pteracantha), known for its small sprays of creamy white, usually four-petalled flowers in late spring, then large bright red prickles and rose hips. 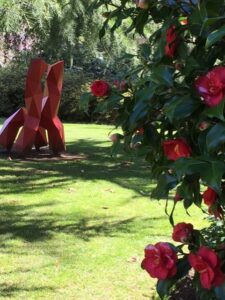 Join the main paved path ahead and continue along to your right until you come to the Chinese 7 – windmill palm (Trachycarpus fortunei). Cultivated for thousands of years, it grows at an altitude of 100 – 2,400m and is very hardy. Turn left at the Sino-Himalayan sign and follow the sign to the waterfall. On either side of the steps ahead are interesting trees. On your left is 8 – blue bean tree or dead man’s fingers (Decaisnea insignis). Around Halloween, the pods turn bright blue and the leaves bright yellow.  Inside the pods are black seeds in a gelatinous pulp. The pulp is edible, but not the seeds. On your right is 9 -Dipteronia sinensis (Synonym Acer sinensis), which is endemic to China and was formerly considered to be a maple. The fruit is a rounded samara containing two compressed nutlets encircled by a flat wing. The conservation status in China is ‘threatened’. Continue past the waterfall and the second stone bridge until you come to a path on your left. Follow the path to the end you will find the 10 – blue Himalayan poppies (Meconopsis betonicifolia). Himalayan poppy needs to be sheltered in a partially shaded area to avoid cold, dry winds, which is why we created this Meconopsis Dell. 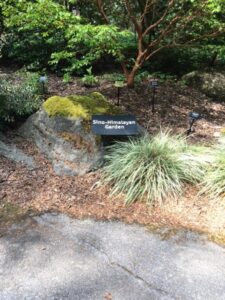 On the way back to the main path is 11 – Rhododendron hemsleyanum, a species found on Mt. Omei at an altitude of 1,100 – 2,000 m, with late blooming, scented white flowers. A 12 – Chinese walnut (Juglans cathayensis) at the end of the path bears fruit that, according to traditional Chinese medicine, improves blood quality and nourishes the brain, heart and kidneys for a long life. Return to the waterfall.

You are in the heart of the two-hectare Sino-Himalayan Garden. Tons of fill and rock were brought in from nearby construction sites to build up the landscape and bury the decommissioned Point Grey water reservoir. Large rocks were used to create the waterfall and the steps on the left-hand side of it. The major objective was to provide shelter for the spectacular woody plants of southwestern China and the Himalayas. The upper slopes of the site were 140 m and very exposed to the elements before work was done. Roy Forster writes in his diary “The S. H. Garden is the finest, best ‘thought’ and ‘wrought’ component of the entire Garden. It has meaning, space, a unified concept, exciting topography and choice of plants that fit the topography”. He points out there are 22 steps – one for every thousand that ascend Omei Shan.

On your way to the summit, on your left, is an 13 – Oyama magnolia (Magnolia sieboldii) that blooms from late spring to late summer, with fragrant white blossoms and contrasting rose-red stamens. Return in the fall to see its showy red fruit. Take note of the ground-level black labels that give the common name, botanic name, its family, where it originates and the year it was added to the collection.

At the summit of VanDusen’s “Omei Shan” is a Chinese Stone Garden on the roof of the reservoir. Stone is one feature of a tradition Chinese garden, representing the skeleton. Lightweight rock formations were used to represent the continents rising out of a bed of river stones, as the roof of the empty reservoir would not support heavier features. Turn around to see 14 – lacebark pine (Pinus bungeana), a new addition to the Garden. It takes 10 years to develop exfoliating bark and reveals patches of white, green and purple, somewhat resembling army camouflage. On old lacebark pines, the patches are solid white. It is native to mountains in China and grown as an ornamental tree in classical gardens where it symbolizes longevity.

Follow the path surrounding the left side of the Stone Garden.  On your left is a grove of katsura trees (Cercidiphyllum). The katsura has rough, fissured bark and leaves that smell like burnt sugar or cinnamon in the fall. Take a close look at the single heart shaped leaves growing out of the trunk. Cercidiphyllum is the only genus in its family; its closest relatives are sweetgums and witch hazels. You may have noticed the weeping katsura in front of the waterfall. Roy Forster often planted a weeping form of trees between various collections throughout the Garden. On the other side of the path is the tree of heaven (Ailanthus altissima). Its male flowers produce a strong offensive odor. It is also known as “the tree of hell” as it can be very invasive.  Both Cercidiphyllum and Ailanthus were chosen for their fast-growing properties to quickly provide needed shade.

Continue down the path around the maze area and turn left at the first path you see (across from the Vegetable Garden).  The first tree you see on your right is 15 – Henry’s maple (Acer henryi). Its leaves are bronze when they first appear, dark green in summer and bright red in the fall. Next to Henry’s maple is 16 – Chinese nutmeg yew (Torreya grandis). Plant hunter Robert Fortune (1812 – 1880) was the first European to describe the seed cones, which look very much like nutmeg. The glossy dark green leaves are yew-like.  Like all the other “discoveries” it had been known to the Chinese for centuries. Turn to the path on your right and wander about. You will find 17 – Rhododendron argyrophyllum, native to forested slopes 1,600 to 2,300 m in China. Note the silvery indumentum. Magnolias in this area may have finished flowering, but evidence of their existence is on the ground. Previous year’s leaves are now a lacey skeleton of silica. Another interesting plant is 18 – Mahonia gracilipes and M. bealei, not to be confused with the North American variety of Oregon grape (Mahonia nervosa).

The path will take you out through the Fern Dell.    Feast your eyes on the wonderful display of R. Augustinii ahead of you.  Retrace your steps or take another path back to the Visitor Centre.  We hope you return often as VanDusen is beautiful in all seasons and in all kinds of weather.