An April Walk Through the Garden 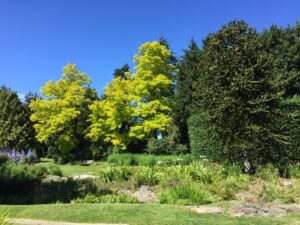 Please note that there are no number or directional signs in use at this time. Look for plant names on black stakes located by many of these plants in the Garden to help you identify them.

Welcome to VanDusen Garden! As you exit the Visitor Centre you will see a lake, slightly to your left. That lake has been named after Bill Livingstone, former Garden Superintendent who designed VanDusen’s interconnected water features, lakes, streams and rockwork. Roy Forster, our first Director and Curator, was responsible for the design and arrangement of the plant collections. Together they created a garden that has been enjoyed and admired by thousands of visitors.

Just to the right of Livingstone Lake, closer to the plaza, directly in front of you is a swale. A swale is a low lying or depressed and often wet stretch of land. This swale, planted with grasses and rushes, helps to ensure proper drainage and reduce flooding in the lake.

At the end of the bridge there is a statue called “Fisherman Hauling in Net” by Gerhard Juchum. He has sculpted a statue called “The Lovers II”, which is on the lawn near Vancouver City Hall. There are a number of different sculptures located around the Garden for you to enjoy.

Follow the path that runs beside the lake. Keep a look out for red-eared slider turtles. We suspect these turtles joined us as donations from families who didn’t quite know what to do with their pet when they tired of them. They have made Livingstone Lake their home and seem very happy here.

Continue on the path and look to your left at the Ornamental Grass Collection at the top of the bank. The grasses are labeled for closer inspection if you would like to return for a closer look. On your right there is a peninsula jutting out into the lake. Located there is our Southern Hemisphere Garden.

You may notice there are some rather large leafed plants bordering the lake. These are gunnera (Gunnera manicata). They are native to the mountaintops of Brazil and their relatives were likely part of the diet of dinosaurs as they have been around since the Mesozoic Era (150 million years ago). You can take a closer look at one near the zigzag bridge. Note the spines on the stems and leaves. Tucked between the large leaves, at the base of the gunnera you can see large brownish panicles. These are filled with tiny reddish-brown flowers.

Proceed across the zigzag bridge. Zigzag bridges were built according to Zen philosophy and teaching. This is to focus the walker’s attention to the mindfulness of the current place and time. Take the path that leads to your right.  Once you come to the top of the small rise look to your right. There you will see a small grove of monkey puzzle trees (Araucaria araucana). These living fossils are so called because they resemble their ancient ancestors found in fossils dating back to the Jurassic Period. They can live up to 1000 years and grow 40 meters tall. They are native to western Argentina and southern Chile. The name monkey puzzle derives from a comment by an Englishman who pondered that “it would puzzle a monkey to climb the tree”.

Turn left and proceed to the western redcedar (Thuja plicata), the largest tree in the Southern Hemisphere Garden. This species is native to the Pacific Northwest. It is not a true cedar but is a member of the Cypress Family

(Cupressaceae).  It can grow over 70 meters high, with a trunk four meters wide, and they can live for well over a thousand years. Some Indigenous peoples of the Pacific Northwest refer to themselves as “the people of the redcedar”, an apt name as they used redcedar for houses, totems, masks, utensil boxes, canoes, baskets, bowls, ropes, blankets, and clothing.

Proceeding down the path you will arrive at an intersection. Continue straight down the path and on your right you will see another large tree, the cedar of Lebanon (Cedrus libani), which is a “true cedar” of the genus Cedrus, native to the Eastern Mediterranean. It can grow to a height of 40 meters with a trunk 2.5 meters wide. A very different species of cedar tree from the western redcedar! The cedar of Lebanon is a national emblem found on the Lebanese flag. Its wood is fine-grained, durable and resistant to insects so it is valuable for construction and making furniture. In the Bible, King Solomon used cedar wood when building his famous Temple.

Continue down the path to the stand of giant sequoias (Sequoiadendron

giganteum).  Giant sequoias can live for over 3000 years, so these trees are youngsters planted around 1975. Turn left at the fork of the path and you’ll find an interpretive sign for the giant sequoias and coast redwoods (Sequoia sempervirens).

Down the path you will see some hybrid dogwoods (Cornus

Continuing down the path you will find Japanese maples (Acer palmatum) growing along the lake shore. Japanese maples are either Acer palmatum or Acer japonicum. These maples have been grown in Japan for centuries and there are many different cultivars. The vine maple (Acer circinatum), native to the Pacific Northest, is a close relative.

During the Edo Period (1603 – 1867) in Japan, at least 250 cultivars of Japanese maple were developed. Unfortunately, many of these cultivars disappeared during World War I and II, due to the need for farmland and firewood.  However, they have made a resurgence and currently about 500 named cultivars exist in Japan.

In VanDusen’s collection you will see both dwarfed trees and upright trees that have grown to about six metres. There are a variety of leaf shapes and colors.

Continue on the path. On your right there is a 9 – trident maple (Acer

buergerianum).  The three-pointed shape of the leaf reminds one of a trident. Look closely at the leaf.  Which of the leaf variations does it resemble?

Further along the path, to your left, there are a number of Acer palmatum of different heights and foliage colors. The diversity of size, form and utility, as well as the variation of leaf color and shape, makes these trees valuable in almost any landscape. VanDusen has about twenty different cultivars of Acer palmatum in this area alone. Throughout the Garden there are many more.

Past the Japanese maples further down the paved path there is a collection of maples that includes a few sugar maples (Acer saccharum). Sugar maples provide the best sap for making maple syrup, but they tend not to thrive in Vancouver’s wet, mild winters.  The maple leaf on the Canadian flag, although similar to the sugar maple leaf, is not an exact duplicate. Think about how the shape of these leaves compares with those of the Japanese maples.

Keeping to the paved path turn left at the fork and follow it around over the small creek. Keeping to your right at the fork follow the paved path for about 20 steps. You will notice on your right a bark mulch path. Turn right to follow it into the BC Habitat Garden, an area planted with indigenous flowering perennials, trees and shrubs that support wildlife. Along the path on your left is a sculpture called Last of the Giants, a wonderful depiction of the size of the trees that once grew in this area.  Notice the size of the men on top compared to the tree trunk.

Continuing down the bark mulch path over the stone bridge you will see two Gitksan story poles (totem poles created to tell stories in some First Nations cultures in BC).  These poles once greeted visitors at the entrance to the Garden.  With the construction of our new Visitor Centre in 2010, we relocated the poles here on the bank of Forest Lake. The pole on your left depicts a story of Baboudina (Chief of the mosquitoes) and the origin of the tiny bothersome insects we know of as mosquitoes. The pole on your right tells the origin of the Black Bear Crest of the Orca clan. The sign behind you describes these story poles more fully.

Take time to enjoy the peace and quiet of this area, noting the stone and wood sculpture, Transformation Plant, with a sign from the artist thanking the Musqueam Nation.

Return to the paved path where you see a giant western redcedar. Head straight down the path keeping the redcedar on your right. There is a collection of mountain ash (Sorbus) on your right.  Look directly opposite these ash and you will see our Conifer Collection. Beyond this collection is a white stone sculpture and a stand of very tall trees. These are Douglas-fir trees (Pseudotsuga menziesii) that are very different from the one we saw at the beginning of the tour. These are towering, straight trees. They are not true firs because they are not of the genus Abies. Douglas-firs can grow 20 to 100 meters tall and are used for building because of the quality of the lumber. The bark of these trees is incredibly thick acting as fire protection.  If you can find a cone on the ground see if you can spot the three-pointed bracts that protrude prominently above each scale. It resembles the back half of a mouse, with two feet and a tail hanging out and the head tucked up under the scale.

Return to the path. Turn left and proceed to the tree that has branches that hang down like snakes, aptly called the snake branch spruce (Picea abies ‘Virgata’).  This cultivar originated as a rare, naturally occurring mutation of Norway spruce (Picea abies), which is native from the mountains of northern and central Europe to the Ural Mountains. For more information read the sign at the base of the tree.

Follow the path to the next fascinating tree on your left called Harry Lauder’s Walking Stick (Corylus avellana ‘Contorta’).  Take a look at the corkscrew type branches.  These branches are widely used in floral arrangement and provide great winter interest after the leaves are gone.  It is named after a Scottish comedian who used a corkscrew shaped cane on stage.

This is the end of the tour. There is much more of the Garden for you to enjoy, or if you would like to return to the Visitor Centre turn left on the path in front of you and head through the grotto.  You will come to Livingstone Lake. The Visitor Centre is along the path around the lake.