Presented at the VBGA Volunteer Awards and Recognition Event on September 29th, 2020

We are thrilled to celebrate our award winners, who were nominated by their peers, recognized for outstanding volunteer service. Your contributions provide inspiration to all of us. 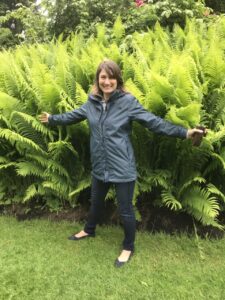 Tresa has a knack for adding value. As an apprentice Guide in spring 2018, she turned her attention to the Waterfall element of the Sino-Himalayan Garden as part of one of Dr. Alan Reid’s assignments. She then used her scientific background to create a theme linking running water to synapses in the human brain — an idea that enriched the final presentation. She then improved the Group’s apprentice learning process by creating an internet group where Guides could share their Garden photos.

Tresa also brought her skills to Erica’s Notebook website, a resource for Garden Guides. Drawing on her background as a computer coder and website designer, she worked with webmaster Marilyn Goebel to improve both the appearance of the site, and its functionality. Tresa’s enthusiasm for the Garden, and for helping people improve their skills, is an inspiration for everyone who works with her. 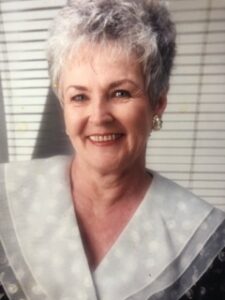 A Plant Sale volunteer since 1991, Peggy quickly became deeply involved with this important fundraising event. In 1992, she became Chair of the Fuchsia section — something she enjoyed so much she had no trouble persuading her daughter, Sandra Proctor, to join her as Co-Chair in 1995. They still hold these positions, but the title has changed: they are now Co-Chairs of the Fuchsia, Begonia and Mini-Rose section. When the then-chair of the Mini-Rose section retired a few years ago, Peggy suggested they combine the sections, to ensure a continued supply for rose-loving Plant Sale customers. Another Peggy initiative: any left-over plants at Sale’s end are donated to a worthwhile cause.

Peggy remains devoted to the Plant Sale, despite occasional health challenges and living some distance from the Garden. Her colleagues value her presence — not just what she does, but the spirit in which she does it. 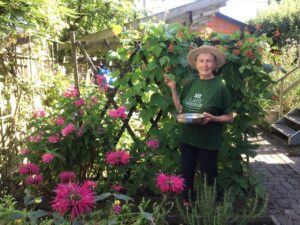 For four decades now, Joan has contributed her talents and dedication to VanDusen special events. Her particular focus, right from the early 1980s, has been the Garden’s annual Plant Sale. At first she worked with the Potluck group, but by the mid-80s she had moved over to the Herb Group, and has been there ever since.

Joan’s involvement and leadership have grown steadily with time. For the last 30-plus years, she has co-chaired the Herb Group with Carolyn Nicholson, and has helped to develop fellow volunteers’ skills, customers’ appreciation for herbs, and growers’ dedication to excellence. Described as “a quiet voice of reason,” she works with the Plant Sale Committee each year, to ensure the diversity and quality of our offerings to customers.

In 2012 and 2013, Joan was Chair of the entire Plant Sale, while still supporting her section co-chair Carolyn and the rest of the Herb Group. The Plant Sale benefited from Joan’s thoughtful, effective leadership style, and posted very successful financial results both years.

Joan often helps at other VanDusen and Bloedel special events. Whatever the event, her approach to it is distinctively Joan: friendly, supportive and enthusiastic. 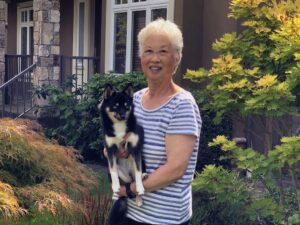 A volunteer since 2008, Kumi has made her mark with School Programs, Walking Guides, the Today in the Garden team, and our Adopt-A-Tree program. She has also been active with special events, like Plant Sales and Compost Sales.

Kumi likes to work without fanfare, responding to needs as they arise. For example, when the Adopt-A-Tree leader moved away she handled that role until a staff replacement was arranged, and she afterwards remained involved with the group. On Wednesdays she puts her botanical knowledge to good use with the Today in the Garden team — and each summer, her contribution reflects the additional research she has done the previous winter.

Until 2016, Kumi spent each Friday wearing two different hats: School Programs in the morning, and Walking Guide in the afternoon. She continues to serve as a Friday Walking Guide, and will often pinch-hit on other days as well if needed. New guides like to shadow Kumi as part of their learning process because they know that visitors love her tours. No wonder: Kumi loves the Garden, and it shows. 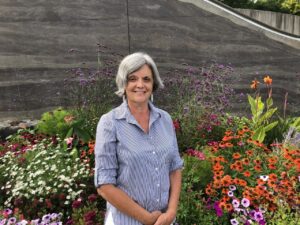 Our visitors appreciate Diane, a volunteer since 2016, because she is a member of our Visitor Services team. Volunteers have even more reason to appreciate her skills and dedication. Diane also works quietly behind the scenes to improve the volunteer experience as a whole, from recruitment to training to volunteer support and future strategies.

As the Visitor Services Training Facilitator, she helps guide new members of that team. As a member of the Volunteer Engagement Leadership Team, she has several other roles. One is to conduct many of the telephone interviews with candidates moving through our recruitment process. This means she is often their first voice contact with the organization. Candidate feedback has made clear that she has a strong, positive impact. After talking with Diane, they become even more enthusiastic about joining our ranks.

Diane also brings her skills to projects that help shape the volunteer experience. She helps research and write procedural materials, such as the New Volunteer Orientation, and she develops questionnaires as well, such as the Volunteer Survey and its resulting Report.

In all her roles, Diane is thoughtful, committed, and collaborative. As one grateful colleague puts it, Diane is a born mentor.

John Shinnick: Volunteer of The Year 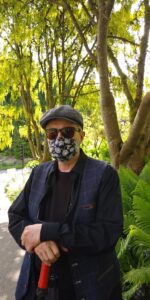 Since becoming a volunteer in 2010, John has been active with Seed Collectors, Guides, and in special projects. In every case, says a colleague, John looks for ways to improve things and then does something about it.

He first volunteered with Seed Collectors, and soon became team lead of the Tuesday team. Since then he has coordinated educational team Garden walks, run a tool-maintenance workshop, and played a key role in the team’s move to the Volunteer Lounge in 2019.

John started with Guides as a walking Guide, but then trained as a driving Guide as well. A few years ago, he discovered the Garden had dead spots where drivers’ radios fell silent. After careful research, John drew up a new-equipment proposal for Guide leaders and the VBGA. Result: the purchase of more reliable radios, providing greater safety for visitors and volunteers alike.

In 2017, John joined the Project Steering Committee for the Wildflower Re-wilding Project. Rich Hankin , project Coordinator, says: “Without John’s assistance, advice and connections to enlist the help of other volunteers, it would have been very difficult to even launch the program.” It not only was launched, it has done good work. Many species are now ready to be placed in suitable habitats throughout Metro Vancouver.

When COVID-19 brought volunteer activities to a halt, John promptly began hosting weekly Zoom meetings for each of his volunteer groups. As always, John looked for — and found — a way to improve the situation.